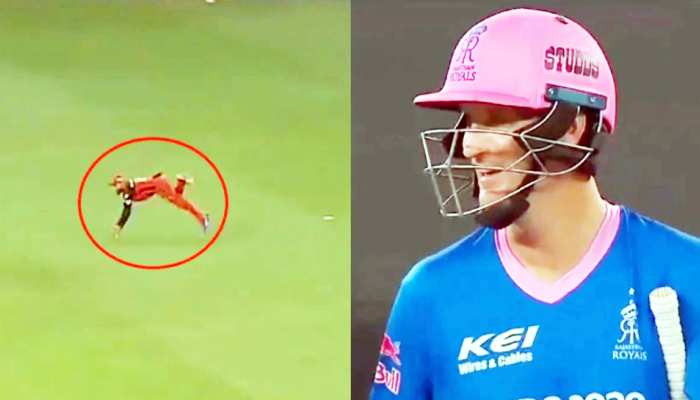 During the 43rd match of the 2021 edition of IPL between Royal Challengers Bangalore and Rajasthan royals, Virat Kohli stunning display in the field shocked everyone in the ground.

On winning the toss, Kohli opted to bowl first The Dubai International Stadium. Virat Kohli and co restricted Rajasthan to 149 after their openers went off to a flying start. Rajasthan’s opening duo had put up 77 runs for the first wicket before Yashasvi Jaiswal lost his wicket. But RR’s batting line-up dismantled soon after Evin Lewis was removed. RR went from 100/1 to 127/6 in a matter of 5.2 overs. Yuzvendra Chahal, Shahbaz Ahmed and Harshal Patel restricted RR to 149/9 after 20 overs.

We all know how tremendous Virat Kohli is on the field. The skipper proved yet again how great a fielder he is. In the 4th ball of the 19th over, RR batsmen Chris Morris played a contract shot directing towards off side. The ball was about to cross the 30-yard circle when Virat Kohli came in the way at the speed of a bullet. Kohli stopped the ball in just few seconds by diving in the air. He immediately stood to his feet and threw the ball to the wicketkeeper. Chris Morris could not believe his eyes. He was astonished by Kohli’s fielding. Kohli yet again proved to the world why he is called one of the best fielders in the game.

Virat Kohli’s RCB chased down the target in just 17.1 overs by 7 wickets. Virat Kohli was cut short of his crease by Riyan Parag whose direct hit sent the skipper back to the pavilion. Kohli scored 25 off 20 before being dismissed. Glenn Maxwell scored a 30 ball 50 while Srikar Bharat also contributed with the bat by scoring 44 off 35 deliveries.